Armored Gorilla (アーマードゴリラ, Āmādo Gorira) is an artificial mutant created by Dr. Genus. It is the third-strongest specimen of the House of Evolution and its only battle cyborg.

Armored Gorilla is a massive cyborg with a gorilla head. His body is protected by full plate armor adorned with spikes on its shoulders, knee pads, and gauntlets. The armor's belt buckle resembles a gorilla's face, and the chest plate features a custom patch featuring the letters 'A' and 'G' arranged in a diamond shape.[3] 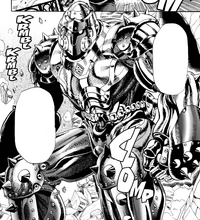 Initially, Armored Gorilla behaves like an automaton, communicating with technical readouts in a robotic, monotone voice. After he and his colleagues are defeated, however, he drops this façade and speaks normally, admitting he was simply trying to "act cool".

Under stress, Armored Gorilla is spineless, apologizing profusely and bargaining for his life by revealing information about his creator, Dr. Genus, and the House of Evolution.

By the time of the House of Evolution's change of objective, Armored Gorilla has learned to blend into society and has become much more mellow and sullen, assisting Dr. Genus with his new restaurant. When Marshall Gorilla attempts to attack him, he simply punches him and tells him not to cause trouble, demonstrating the end to his violent ways.

Saitama defeats Kamakyuri, Frog Man, and Slugerous in a failed ambush, but is grabbed and rooted in concrete by Ground Dragon. Genos attempts a rescue, but is intercepted by Armored Gorilla, who piques Genos' interest as a fellow cyborg. While Beast King and Ground Dragon engage Saitama, Armored Gorilla battles Genos, losing his helmet and robotic limbs in the process.[5]

Defeated and dismembered, Armored Gorilla sneers that Genos will never defeat his stronger comrade, Beast King. After Saitama arrives holding Beast King's severed eye, however, Armored Gorilla quickly relents, promising to answer any of their questions in exchange for his life.[6]

After revealing the history of Dr. Genus, Armored Gorilla is left lying in the demolished overpass. He contacts Dr. Genus discreetly to warn of their arrival, but is nearly caught in the act by Genos.[7]

During the Dark Matter Thieves attack on A-City, Armored Gorilla along with his master, Dr. Genus, are seen in their newly opened takoyaki shop preparing takoyaki while watching the news on the television.[8]

While heading back to his master while wearing a hood to disguise himself in public he is spotted by Marshall Gorilla. After having his allegiances questioned by Marshall Gorilla, Armored Gorilla is attacked by the latter when he manages to counter his knife attack with a single punch to the face, knocking the opposing gorilla out cold. He then continues on his way, unaware that one of the House of Evolution's former subjects, Zombieman, is trailing him to find where Genus is hiding.[9]

Armored Gorilla is a Demon-level threat, making him quite a formidable opponent. He called himself the third strongest member of the house of evolution, after Carnage Kabuto and Beast King. With their deaths and Zombieman's defection, he is now the strongest fighter in the House of Evolution. He is made using the best mechanical technology of House of Evolution. He is capable of defeating Marshall Gorilla, a Tiger-level threat, in a single punch.

Immense Strength: Owing to his size, Armored Gorilla can shatter solid concrete from mere impact, leap great heights, and create large craters upon landing. He was also able to briefly keep up with Genos in terms of physical strength and knock out Marshall Gorilla, a Tiger-level Mysterious Being, in one punch.

Immense Durability: As a cyborg, Armored Gorilla is very sturdy and extremely durable. He easily withstood Genos' Incinerate thanks to his heavy armor (重装甲, Jū sōkō), and when Marshall Gorilla, a Tiger-level Mysterious Being, attacked him with a knife, it shattered when it made contact with his face.

Full-body Cyborg Enhancement: Armored Gorilla's body is modified with cybernetic parts, including very sturdy armor. Even after being dismembered, Armored Gorilla exhibited no signs of discomfort, indicating his cyborg limbs are separate from whatever biological organs that remain.

Armored Body: Armored Gorilla's plate armor can withstand massive physical trauma and extreme temperatures, such as the force of Genos' powerful heat blasts. His partially organic head is protected by a separate helmet.

Remote Transmitter: Armored Gorilla's head contains a hidden communication array beneath his skullcap, allowing him to contact the House of Evolution from a remote location.